Florida Republican Gov. Ron DeSantis said Thursday that the anniversary of the Jan. 6 Capitol riot is “Christmas” for Democrats and the mainstream media before vowing to pass on what he called the “nauseating” coverage.

​”This is their Christmas,” ​DeSantis said during a news conference about COVID-19 testing in West Palm Beach, referencing Washington- and New York-based media outlets.

“They are going to take this and milk this for anything they can to be able to smear anyone who ever supported Donald Trump​,” he added.

DeSantis, a potential 2024 Republican presidential candidate, predicted the coverage would be a “politicized Charlie Foxtrot,” using military slang for a chaotic situation.

According to DeSantis, his Sunshine State constituents have more pressing concerns, such as inflation, gas prices and rising crime rates.

“There is an obsession with this among the DC-New York journalist class, and I think it’s because it allows them to spin a narrative that they want to spin,” he said. 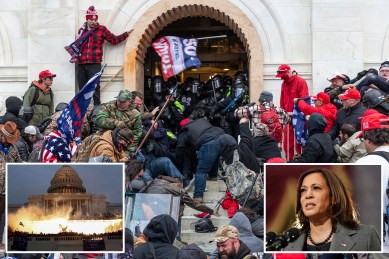 ‘This is their Christmas’: Gov. DeSantis jabs at news media on Jan. 6 anniversary

Read ‘This is their Christmas’: Gov. DeSantis jabs at news media on Jan. 6 anniversary by Florida Politics